As a tourism student, have you ever considered working abroad in the tourism industry during summer? Well, I can tell you, it’s an amazing experience you’ll never forget! I will tell you about my experience in the Lac du Der area in France, where I have worked on a campsite for Vacansoleil during the summer of 2012.

For as long as I can remember, I have been interested in travelling, learning new languages and experiencing other cultures. After I had worked in a hotel in Zeeland during the summer of 2011, which was already an unforgettable experience, I decided I wanted to go abroad. I went looking for Dutch organisations that offer summer jobs on campsites in Europe and I thought Vacansoleil would suit me best. The organisation offers a more than acceptable salary, transport refund, accommodation on the campsite, insurance and support during work if needed. Anyone who is of age, available in July & August and speaks Dutch, English and at least one more relevant language can apply for a job. Once you fill out the form on the Camping Jobs website, you can indicate the kind of job you like to do (animation, reception, waitress, etc.) and  the country you would like to work in.

As I had liked the contact with the guests in the hotel so much, I applied for a job at the reception and after the application form was sent, it was time to wait for a response. After one week, I got a call from one of the recruiters who asked me whether I would like to come to Eindhoven (where Vacansoleil Holland is based) for an interview. I was so excited! Time passed fast and before I knew it, I found myself sitting in a little room in the Vacansoleil building where I was shown an introductory video about the organisation. Then, a woman who introduced herself as Noortje, entered the room. She asked me about my interests, previous working experience, motivations to go and work for Vacansoleil, motivations to go and work on a campsite specifically, my expectations and my preferences concerning the work environment. Additionally, my language skills were tested. My French was not really good, although I had taken French classes during high school, but I really wanted to go to France to improve my skills, so I tried to convince Noortje with my enthusiasm. Once the interview was done, Noortje told me that she would contact me in about one week to let me know whether they would hire me…

And indeed, after two days the good news came: the interview was perceived as very positive and they would start looking for a campsite in France that would fit me. I was super happy, I was looking forward to it so much! Soon, they found a nice campsite in the Lac du Der area in the province of Champagne-Ardenne. Now everything was settled, I could start informing myself about the campsite, the people and the surroundings. 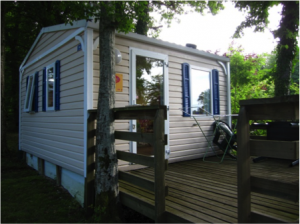 From then onwards, I had to communicate with the campsite myself, in French! Fortunately, my future colleagues were very nice and they told me about the small though cute French crew I would be working with and about the other holiday workers. There would be another Dutch girl of my age who would be doing children’s animation. I contacted her immediately and on June 30th we travelled to the little village of Eclaron together. We were so excited! Du pain, du soleil, oh la douce France! We were so lucky to each have our own cute French mobil-home to stay in; if you are going to work in a big team on a big campsite in the south of France, you’re very likely to live in a big bungalow tent with other colleagues, so our living conditions were very luxurious.

During my first day as a receptionist I felt very uncomfortable. I had troubles understanding the language and I had to get used to the whole situation. 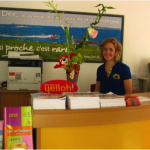 That process went very fast, though. I started to like the job, the campsite and my French colleagues very soon. Fortunately, there was my Belgian Vacansoleil colleague who could translate some stuff during my first days, but afterwards I was capable of dealing with most things myself. With my two colleagues and another holiday worker from a nearby campsite, I had a great time after work too.  We became part of the ‘campsite family’ which made me feel home. Although the weather was not always that nice, working on the campsite was always fun. There were lots of different things to do and I noticed that most Dutch guests were very glad to have someone speaking their own language. Because the campsite was relatively small, there was a lot of personal contact with the guests. I found it really nice to chat to some of them once in a while and to get their opinion about the campsite and the surroundings.

After a few weeks, my French had gotten a huge boost already. I was able to chat with my French co-workers and to check-in French guests and give them all the information they needed. Of course they noticed that I was not French, but they were all very friendly and did not at all mind that I did not speak the language perfectly. It was only after six or seven weeks though, that I really had the feeling that I could speak French well enough to help the guests properly. Even the campsite owner told me she had noticed my progress. I was so proud of myself! When I first got there, I was hardly able to formulate proper sentences, and now I was even able to answer the phone correctly without having to ask for a French colleague to answer questions! 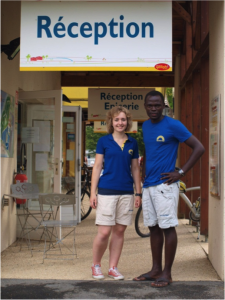 It may be hard in the beginning and I must confess, after two months I was happy to be home again, with Dutch customs and my family and friends around. But I have learned so much that summer and I have been able to combine earning money with being on holiday and improving my languages skills. Recently, I found my name in one of the customer reviews on the Yelloh! Village website. The best reward I could ever get! Actually I owe Vacansoleil and the campsite another merci, because I even met my boyfriend there..

I hope my story sparked your curiosity to working abroad yourself. If you consider working for Vacansoleil, you’ll find everything you need on www.campingjobs.nl.