First weeks in Breda as a student

How the Dutch loooooove shoes!

When I decided for the Bachelor of Science Tourism programme, I was still in the US. One year went by so quickly until the most challenging question affronted me. I didn’t know if it would be the best option to go to the Netherlands instead of staying in Germany, where I am from. But I had this strong desire to go abroad, to go and just explore and live in another country, to see whether Holland is indeed that stereotypical as everybody says (thinking of drugs, windmills and “gezelligheid”) and one of my main motivators: to speak English and start with a new language.

First thing on my to-do-list: start looking for a room. That’s easier said than actually done. I registered at different house markets, joined several Facebook groups, and asked my friends if they know someone who knows someone who eventually knows someone who is renting a room… and finally went to NHTV and talked to them. I had a look at a few rooms here and there but they were either too small, big or too dirty. I got desperate and thought of studying someplace else. However, my parents supported me and helped me as much as they could, they told me not to give up.

And in the end, I was lucky. I responded immediately on a post in the Breda living arrangement group and found out that the girl I contacted was going abroad with a friend whom I met in the US before. The world is so small! When I got the room I felt like I was the happiest person alive! A few days later I moved in, settled down well, and tried to feel like a real Dutch person by riding the typical Dutch bikes. 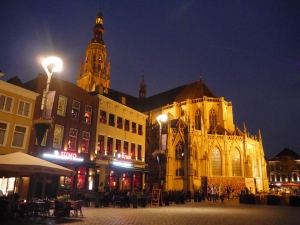 Second, I needed to get the municipality matters done. As an international student everything is more complicated. The one good thing is that we get a hoodie for free! A visit to the ‘Gemeente’ was necessary to register in Breda. Don’t forget your international birth certificate that is not older than 3 years. Furthermore, in order to get a contract for your phone you need to open a bank account.

And last but not least school. Getting all the required books, folders, markers, blocks and all that stuff. Getting to know how the Online Personal Portal and the library works, trying to remember the room numbers our lectures are held and testing the food in the cafeteria. That was an important part of my new life in Breda!

As soon as those steps were done, I concentrated on getting to know Breda. Together with my classmates, we enjoyed a drink at Café Vulling on the Grote Markt, took part in an awesome pub crawl and relaxed in the Valkenberg Park. The weather was great and so we discovered the whole city relatively quickly. Shopping was also on our list. If you wander through the streets, it feels like the Dutch loooooove shoes! Seriously, there is one shop aligned to another one.

One hint: Register at Compass, the international student association at NHTV to get a discount on drinks and snacks in some selected shops in the city centre. It is worth it!!

Right now, I am a happy student of the BSc Tourism! I got to know so many great people to work with and am glad that I listened to my parents and didn’t give up 🙂