On Wednesday, I woke up in the middle of the night because of a singing sound from outside. Half of the population in Labuan Bajo is Muslim, so several times a day a loud voice is yearning, which you can hear through the whole town. In the morning, our group woke up in a bungalow on a hill with a nice view on the harbor. 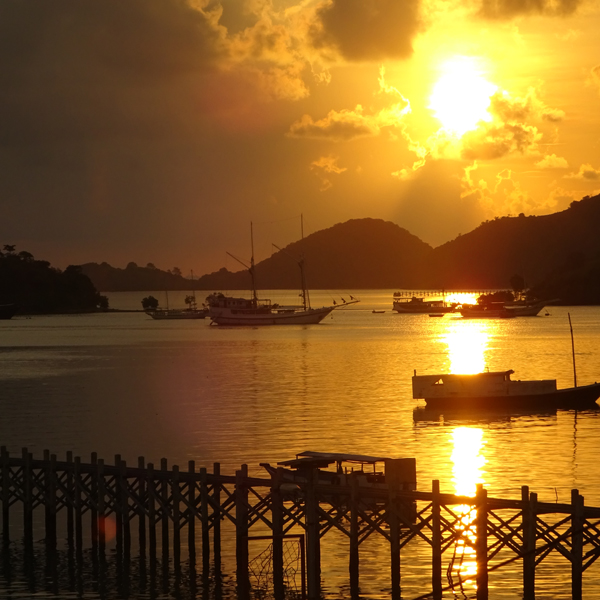 The bungalow is normally for three persons, but we decided to make it a party in the bungalow. Thus here we are, with five people in a bungalow with one cold shower and a toilet we can flush ourselves with a bucket of water! After having a breakfast with banana pancakes, a part of our group went into town to spot the yellow garbage trucks which should be driving around to pick up the trash. For our research, we wanted to talk to them to find out where they take the waste of the city and what they do with it. After some yellow truck hunting, we didn’t catch the garbage trucks and went on with our next data gathering of the research: talking to tour operators.

Most of the tour operators were very helpful, especially because we were not only there for conversations, but also to book a trip for ourselves! We wanted to engage in some wildlife, adventure or nature tours to find out more about what is happening on a tour and who are all involved. Thus our plan now is to go to a waterfall in a rainforest, the spider web rice field and as highlight, the Wae Rebo village where a group of people live separately from the rest of the population according to old traditional standards and cultures. We are not sure what to expect, but the four hour hike to the village will already be amazing and probably a challenge.

After a delicious meal with another group and a beautiful sunset, we had a Skype conversation with Mariëtte to share our experiences. Despite of the fact she cannot be here, it felt like she was here a bit.

To get back to our bungalow with no warm water, the girls of our group decided to take a shower somewhere else. So with our stuff we walked to the other side of the village, like being on a camping and going to the shower building. We walked to a hotel where another group is staying to have a warm shower. After a long day we were all tired, but really excited to do our three day tour of amazing activities beginning this Saturday. We will tell about all our experiences of our tour in our next blogpost, so make sure to stay tuned!