Going around in Labuan Bajo

Tuesday the 28th our 1st day of independent research arrived after a fully scheduled and exiting introduction week. Right after the interesting meeting with the local tourism school and our new local group members, the time has now come to organize our work schedule the way we want to.

In order to recharge our batteries we took the day off to relax a bit. The female members of our group decided to visit the closest beach near the hotel, Pede Beach. White sand, light blue sea, tropical trees and a strong sun; it was a combination that was hard to resist. With temperatures around 27 degrees, warm sea, soft sand, and smiling local people waving hello, there was no doubt that even by doing “nothing” we still had “something” to gain. 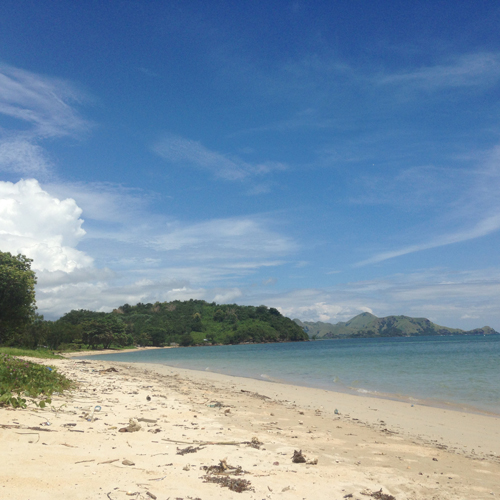 More specificly, some local schoolgirls shyly approached us and asked us some basic questions such as: where are you from, what brought you to Labuan Bajo, etc. The conversation was funny and some pictures were taken as well. It made us realize that everything is about perspective; somethings that are very normal to us – like going to the beach – can be something very unusual for the local community. “Something” to talk about with their friends, to take pictures of and smile about.

Meanwhile, at the other side of Labuan Bajo, the male members fully charged and in an adventurous mood, rented a scooter and were ready more than ever to discover Binonco beach. Things did not go exactly how they planned, such as communication problems with the local people, messy infrastructure, and maybe too much sun as well; their dream to visit the beach did not come true. Instead, they were driving in circles around the area.

Then, the moment came to give up and to refill the stomach. The chilly girls and the adventurous boys decided to meet up at the Blue Marlin restaurant. The day closed by sharing our stories with each other, while eating some Mediterranean food, and watching the Indonesian Sunset. What’s more international than this?