Ending the International Field Project 2015 with a Tour de Bali

“The sound of the wind is whispering in your hair. Can you feel it coming back? Through the warmth, through the cold, keep running till we’re there. We’re coming home now, we’re coming home!”

Actually it’s one day too early for this song, I know, but this was the core feeling that we had today. Especially when we sat in the car and drove back in the direction of the airport, finishing our ‘Tour de Bali’. This is our last full day here in Indonesia. Time flies when having fun. On the one hand I’m sad that it’s (almost) over now, but on the other hand it’s also good like this; I’m looking forward to see my family friends again.

In this final week of the IFP we returned to Bali and from Tuesday afternoon onwards we were off. Free to do whatever we wanted to do. So, together with another research group we decided to make a trip around the island. We only had 4 and a half days, but we wanted to see as many different parts of Bali as possible. And I think I can say that we really succeeded to do so. Even while there’s still a lot to discover, we have seen that Bali has much to offer. A lot more than just the beach areas around Kuta and Seminyak. 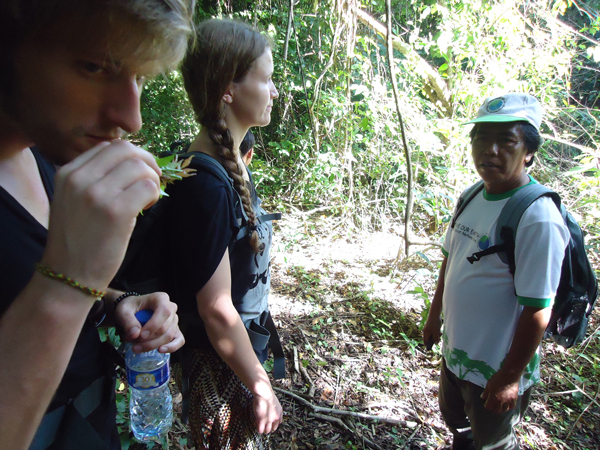 We slept in Pemuteran which is in the northwest of the island. Pemuteran is situated close to the Bali Barat National Park, which we visited early in the morning, because by that time it wasn’t that hot yet. We did a hike with a guide for about two and a half hours through the mangroves and the forest. The guide knew a lot about the area and had a story about almost every tree, plant or animal, so it was a really interesting hike and also totally different from the other hikes we did earlier in the International Field Project.

After coming back we went by car to Tanah Lot, which is famous for its temple on the rocks. In this area we had booked a hotel for the night. The drive to Tanah Lot took almost four hours and we were packed with eight people plus all our luggage in a small van. Let’s say that it was at least cozy. But it saved us a lot of money to do it like this, because otherwise we had to pay for two cars. During the trip there was also quite a lot of discussion about what music to play, because eight people in one car means eight different preferences.

The reason why we left Pemuteran directly after our trekking was mainly because we wanted to see Tanah Lot by sunset. Unfortunately we were not the only ones who had this idea. The place was loaded with people so it was impossible to take a picture of the Tanah Lot without other people on it. Luckily the sunset was beautiful, which compensated for a lot.

After dinner and looking for some souvenirs, most of us directly went to bed. We were tired. As the IFP reaches its end, so does our energy. But it was definitely the best trip I’ve ever made in my life. And even while I always want to see more, I think it’s good the way it was. It has been a great time, but it’s also good to return back home. But before we set foot on Dutch soil, let’s first travel for 24 hours!