Saturday the 30th deserves a little extra attention, considering the day really ended with a bang. The story starts at 17.00 with Axel and me walking towards the dock at the Inle lake Heritage. There, we got into a boat with Lieke and Saskia, who were happy to have the extra company. We started heading back over the lake towards our hotel, Remember Inn, which would be approximately an hour boat drive away. The sky looked a bit grey, but it was hard to differentiate between clouds and the fogginess (condensation?) caused by the intense heat.

For the first part of the boat ride, we had relaxing conversations with one another, taking a few nice pictures of the sunset over the lake. But then, at about the half way point, we started noticing lightning bolts in the far distance. There was just a flash or two, not too far from each other, but this was nothing to worry about we said to ourselves. Then out of nothing it started pelting rain drops. We tried to cover our faces from the painful water droplets as much as possible, me even joking to Axel, saying this would probably be the only time that we’d be cold in Myanmar. But this was not the end of our adventure. On the contrary, within the next 10 minutes the lighting spread inconsistently to about one third of our field of view, and the sky just kept getting darker and darker – both grey of weather and the sun disappearing into the darkness. Meanwhile, Lieke and Saskia, who were sitting towards the front end of the boat were beginning to get a little anxious at this point, being particularly unpleased with the lightning. There was however really nothing we could do, as our lives were in the hands of the boat driver – who like most people in Myanmar – didn’t even speak English. I made a comment to Axel, wondering how the supervisors, who were going to stay slightly longer for a drink, would get back when it got dark. This seemed impossible to us, seeing as the lake was filled with floating moss and plants, which already challenged the drivers to maneuver the boats skillfully around the debris during the day. Throughout the day the drivers had to do everything they could to avoid the debris, getting stuck once or twice and having to cut the floating debris off the engine propeller. So how on earth would this be possible at night?

Nevertheless, at this point we personally quite enjoyed the lighting, as it was rather beautiful, and I hoped I would get a shot of it striking down in the distance on camera. But this feeling of beauty was slowly being transformed to anxiousness, as the harsh weather and lighting kept getting closer, and the boatman kept driving straight towards it – seemingly un-phased by it. Then, within the next 5 minutes things got quite serious. All of a sudden there was lighting and light flashes all around us, and the girls really started panicking. We agreed that we’d rather get off ANYWHERE and just take a taxi over land if possible, so I turned to the driver and asked him if we could go to land. He straight up ignored us – so I asked him again, once again with no response….

We got into a more narrow part of the lake with a bunch of wooden cabins ‘floating’ between the larger parts of agricultural/seaweed debris. The driver of the boat didn’t seem calm, but what was most sticking was that no one in Myanmar had ignored us up to this point in our trip, yet he just refused to acknowledge our existence. He started talking to a local villager who passed by on a boat near us, but we could not understand the Burmese. Again, this time quite worried, we asked him to pull over and let us in somewhere (ANYWHERE!), as long as we could get out of the water. Again ignoring us, the driver instead followed the path of the local boat driver we came across, I think in an attempt to get us away from the storm somehow. He raised the throttle and sped through some of the debris following the villager, which is what caused our boat to make a loud muttering noise (louder than any time before that day). We got tangled in the debris and the engine fully stalled – ouch, this wasn’t good. Lighting flashed all around us, lighting up the entire sky with approximately 3-5 seconds between flash and KAABOOOOOM. We were floating in the middle of their little village and had no clue what was going to happen next. The villager returned and helped our driver (with a lot of effort) to push our boat towards the patch of man-made lake (mud) ‘land’ nearby. Thankfully, they managed to do this successfully, so quite relieved, we were able to jump out of the boat and climb into a small local wooden & bamboo cabin. To our surprise, taking one step inside, we noticed the cabin was really full. There were at least 25 people sitting in the wooden mini-house, which was lit by one lamp attached to a 12V battery. The cabin could not be more than 15 square meters in total. Around one third of the people inside were children, one third old ladies and women (of which 2-3 were breastfeeding) and the remaining persons were men. We all repeated “Jesuba” multiple times (thank you!) as we walked in and sat in front of the somewhat shocked locals. We did our best to smile and be grateful, but we couldn’t exactly start a conversation as none of them spoke a word of English, and our Burmese was non-existent.

I looked back and noticed that the kids all looked quite frightened and uncomfortable (who wouldn’t be if 4 people decided to barge into your house during a storm unexpectedly?), and that’s when I realized I had my bag on me. I had brought some coloring books, markers and pencils on my trip for potential less-fortunate kids (and to aid in laying a foundation of trust for our research), not knowing when I could use them or if it was even clever to bring them. I pulled out my etui with markers, the pencils and the two coloring books, and started ripping a few pages out of the booklet. I gave a couple of options to the shy and hesitant kids (7-8 in the cabin?), of which only two were a little intrigued. The two instantly started drawing in the Disney pictures, as I tried to convince a few more kids (with the included stickers) to join in. They were too shy to participate, so instead I joined the two in coloring, hoping the rest would join in afterwards. Meanwhile, Axel, Lieke and Saskia were trying to establish communication with our supervisors to inform them about the situation. Within 10 minutes there were 7-8 kids on the floor either looking at each other’s work, or drawing themselves.

The parents seemed quite content with the situation, and the older ladies in the room kept giving us lovely smiles. A few minutes later we were unexpectedly served hot tea, as only ones in the cabin. It was at that moment that we realized these booklets were the best thing I could have brought on the trip. We were so grateful, and I was so pleased, for at least this way we could do something in return for these amazing people helping us, even if it was only distracting their kids from the storm. The atmosphere was now more comfortable and trusting, so while I focused on my coloring skills and the continuous masterpieces presented to me by the local kids, my boat-buddies established communication with the supervisors and discussed our situation. After the tea, Saskia, Lieke and Axel shared a postcard they had brought from the Netherlands, which had pictures of tulips, a windmill and ‘klompen’. The villagers in the cabin didn’t quite understand the ‘klompen’ concept so we pointed to our shoes as Saskia dug into her bag and pulled out a pair to show them (in tiny souvenir form). They laughed and seemed to enjoy this quite a lot, which made us feel very welcome.

In total we sat in the cabin for around an hour. A bit before this hour was up, our boat driver came from outside, soaking wet, indicating we could leave. He had spent the entire time repairing the boat outside on the lake, in the middle of the thunderstorm. We asked if it was OK to take a picture, receiving no notable objections, so I stood as far as I could in the corner and tried to get as many people as possible on the picture. We then thanked everyone a couple of times again, put on our shoes, indicated to the children that they could keep the coloring books and pencils/markers, and then swiftly moved towards and into the repaired boat. It was however no longer light outside, and in this particular village there was absolutely no electricity, so it was pitch black outside. We used our phones for some basic light to place ourselves in the boat and then noticed two handfuls of people from the cabin come outside to wave us goodbye, which was really awesome.

Unfortunately, we weren’t out of the deep end yet. The engine started and we drove off… for about 30 meters, where the boat stopped again. We went the wrong way so the driver had to push the boat the other way around with a peddle in the relatively shallow water. This took another 10 minutes at least, but at least the storm was over right? Ehh…. No. A huge white flash covered the sky, and within 3 seconds we heard a gigantic ‘BOOOOOOOOOOOOOOOOM’, as a warm wave of air passed over us -SH***********T. We still weren’t home-free. The driver managed to maneuver the boat towards the right direction finally, while Lieke was taking a picture of a similar cabin nearby for our memories. But as she clicked the ‘take picture’ button, behind her I saw a huge 5-armed lightning bolt strike down somewhere in the distance, lighting up the entire sky. The sheer power of it was magnificently beautiful yet equally frightening, so I yelled “Did you see that?!”, to which Lieke responded “ – OMG look at this picture!”. The resulting picture was indeed amazing. 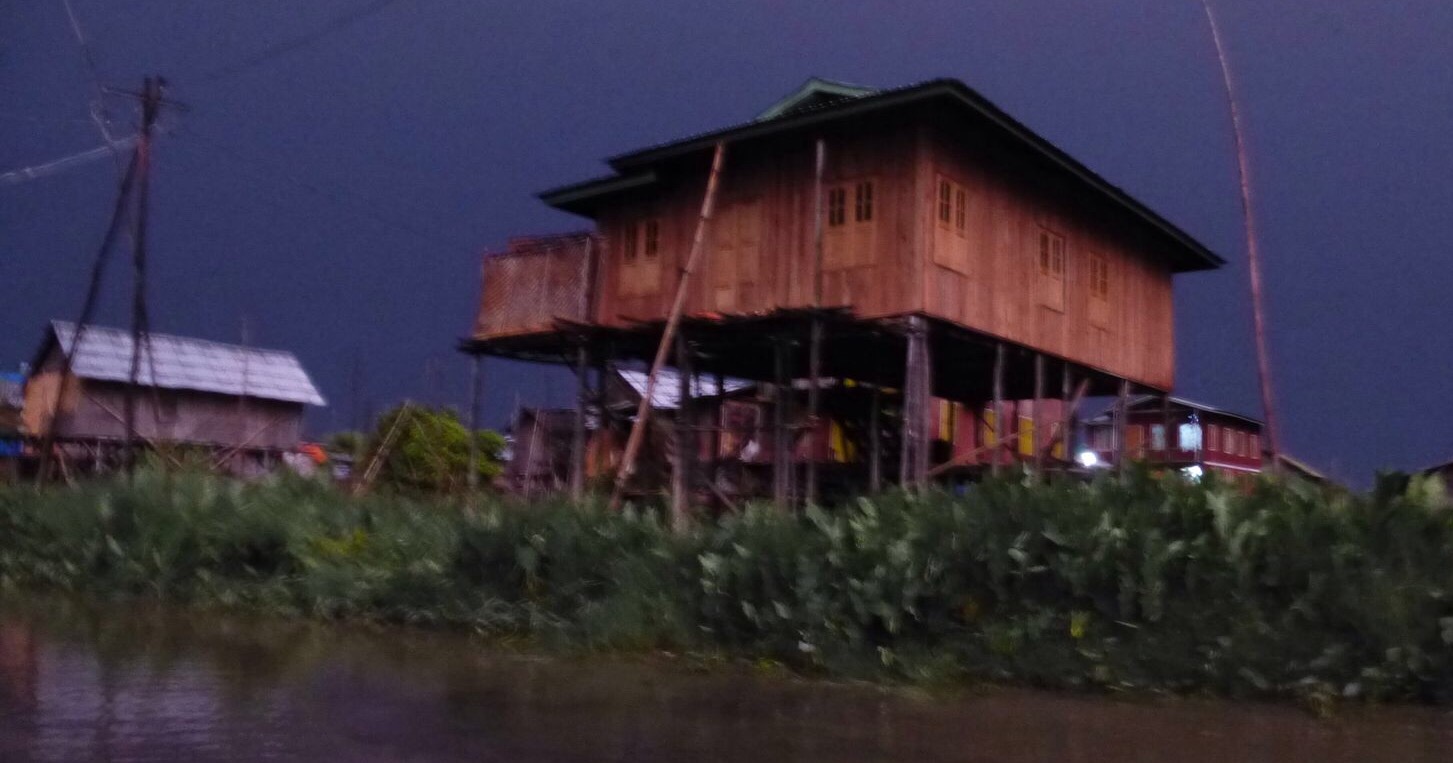 It was so dark; we couldn’t see our hands in front of us. Then lightning lit up the skyI  moved agilely towards the front of the slim boat, taking the flashlight from Saskia to try and help the driver see debris in the water a bit better, but the field of view turned out to be no more than 10 meters ahead of the boat. The next 10-20 minutes were spent slow-driving the boat down the narrow path of water between floating grasslands, while attempting to spot debris ahead which could hinder our return. The driver avoided most debris, and anything that got past into the propeller did not manage to stop it, so we actually managed to get to more open water. Here, we could finally pick up the pace a bit, although it still required some intense & focused light shining from me and skillful driving from the boatman. The driver managed to get us through the open water without further complications, avoiding debris nicely, and was therefore considered a BAWS (awesome, great, fantastic). So relieved to touch land (3,5 hours after departure) and pumping with adrenaline, we handed him a lovely and well-deserved tip before he headed off, after which we walked to the nearest restaurant for some dinner, a beer and some shisha – to let the blood-rushing experience sink in.