For us – Europeans – the usual morning routine includes a refreshing shower, an energizing breakfast and putting on some fashionable clothes, jewelry and for the girls some mascara. The ethnic groups close by Loikaw start their day a little differently. The so-called long neck women in the village of Pan Pet don’t need to spend much time before the mirror in the morning, as they already wake up with multiple kilos of heavy golden rings around their neck. The illusion of a really long neck is created which reflects a local beauty ideal. However, the long necks as mentioned are only illusionary because in reality the weight of the rings pushes down the shoulders and deforms the spine-ribs? instead of stretching the neck. According to the women this is quite uncomfortable in the early stages, but they get used to it. Furthermore, we learned that it is their own choice if they want to wear the rings or not. We were able to try out how heavy these rings are and we would most likely decide against it despite its unique and beautiful appearance. We will rather stick to the fascinating golden and silver bracelets that they also make. Before we could buy them, we could try out the hard work that it takes to make these bracelets ourselves. 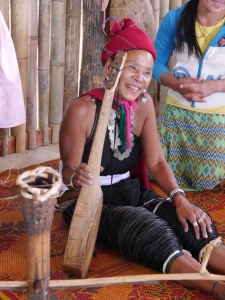 ough the black wires or rings around their knees are probably most striking. The goal of the ITC and us, however, is not that local community is simply there to be looked at, instead it is about their empowerment by learning and interacting with them. They showed us their traditional techniques of weaving and we had the chance to familiarize with the local music and instruments. We were able to ask many questions to them and vice versa. The people in the village were really fascinated by the colorful tulips from the Netherlands. In particular, the community based tourism group had an intensive and successful day of data collection. Although, we can probably all agree that each and every single one of us learned and experienced so much regardless the direct relevance for our research. A big thank you goes out to the International Trade Centre (ITC), our student guide Mongo, our regional guide Martino, the staff of the ITC, and our supervisors.

This day was also valuable for our research projects. The research team of community tours had a great chance to experience two community tours in Loikaw themselves and the chance to talk to the regional guide, while our team, concerned about the restaurant sector of Loikaw, had the chance to gain additional data about the food production in nearby communities, and their decorations and goods production, which was also valuable for the hotel group.

After this long exciting day, we were glad that we had no specific time to be up the next morning. We were able to sleep in, have a relaxing breakfast and switch the hotels to be reunited with the research groups. After we received some last facilitating instructions from the ITC and supervisors, we were able to go out in the field and start collecting our data and building relations.

Once again, at the end of the night, the electricity went out. We already learned to cope with it and are simply enjoying the beautiful sky full of stars.