A bumpy ride to Koh Samui

After a short night most people felt slightly salty; the evening before we visited Khaosan Road, the famous backpackers street of Bangkok. The day started with an early breakfast in the most luxurious hotel of Bangkok. For some this breakfast was God’s gift, as you can see on the picture, after Myanmar breakfasts for two weeks. 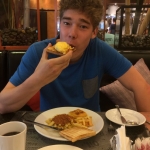 At 0900 we gathered at a conference room for a final wrap-up meeting. The Kalaw, Pindaya and Loikaw research teams came together to share their research findings. After a short coffee break we exchanged the main challenges we encountered during our field research and talked about how to process our data when we get back home.

Then everybody was finally released from their research duties: AKA FREEDOM! Some planned to stay in Bangkok whilst others decided to move to the lovely beaches of Southern Thailand. As some of us really could use their well-deserved R&R, we went on a trip to Koh Samui, one of the many beautiful islands Thailand offers. Adventure began at Bangkok domestic airport where Pim could not find his passport! A few nerve wrecking moments later he dug it up from his big backpack. This happens when for once you do not put things in their usual place. So we were finally ready to book the plane tickets to Koh Samui.

After a 70 minute flight we landed at Surat Thani airport. In front of the airport only two or three ennobled taxi drivers, one of them was a Thai soldier, were waiting in their ‘airport limousines’ to bring tourists to their destinations. Since they had a monopoly position they charged astronomical fees. We decided to kindly decline their offer and walked off to find ourselves another taxi. Soon we foun

d a friendly TukTuk driver who was willing to bring us to our hotel at a special rate. However, as we approached the TukTuk driver the fancy limousine started to follow us. The moment we agreed upon a price with the Tuktuk driver, the soldier jumped out of his car and started yelling at the TukTuk driver while taking pictures of him. We were astonished by his actions but could not do a thing about it. The TukTuk drove 200 meters, approached a fellow TukTuk driver, and gave him money to check the road ahead for that soldier and his comrades. The TukTuk driver asked us to get out and agreed that he would pick us up after the military checkpoint. So we walked for ten minutes and then jumped back into the TukTuk.

After this unexpected escapade we drove to our hotel which consisted of several containers and a swimming pool. As you can imagine we were eager to jump in, but first we went for dinner at a restaurant with nice, little bamboo huts. After our supper we ended our day with a refreshing swim in the pool and decided to call it a day.