Jeg snakker ikke norsk… Tusen takk, og ha det bra! So far most of my Norwegian knowledge. A bit more than half a year ago, I chose to spend my free choice period (5th semester) at UiT Arctic University of Norway – campus Alta. For those who do not know Alta (which I can imagine): it is located in the county of Finnmark, very much up north (a three-hour drive to the North Cape!). It is one of the places where in summer there is 24hrs of daylight, and in winter 24hrs of darkness. Besides that, it can get -30°C with snow that reaches to the second floor of our house. Good excuse to drink lots of chocolate milk ;-). But for now, we have the nice weather of ±12°C, with often blue skies and less rain than in The Netherlands.

So what does this ‘Erasmus-life’ include in a small city such as Alta? First of all, the multicultural campus! 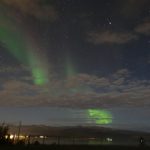 On my floor (with the nickname ‘The Refugee Camp’), we have a nice mix of people from Norway, France, Germany, Somalia, Croatia, Japan and Sápmi, which is the cultural region where Sami-people traditionally come from. This leads to interesting discussions between people from different cultural backgrounds, and brings delicious food nights! Besides that, Alta has a so-called ‘Studenthuset’, where all the parties take place. But it is also the perfect place to have a drink during the day. Luckily for us, this is only a 1-minute walk. And with some luck, the Northern Lights can be seen during the walk! Finally, Alta is surrounded by beautiful nature. Many fjords and mountains surround the ‘city of lights’, which makes it a really good camping and hiking place. Of course, we had to put this in to practice. Camping without tents on probably the coldest night so far (temperature around 0), and a hike to the top of Haldde, the biggest mountain of 10 around Alta. Unfortunately, I did not make it to the top, but I did see some reindeer crossing my path on the way, which was worth way more.

Obviously the Erasmus-life is not only partying. 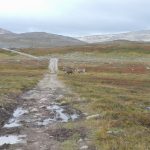 At the university, I am following three courses, of which only the first one has just ended: Communication Skills, Intercultural Communication and Indigenous Representations. So what to expect from courses in another university? For me, there is a noticeable difference in level between the BSc Tourism and the course of Communication Skills. Where we are stimulated to think critically, reading many academic articles and do research in the BSc Tourism, the focus here was on more practical things such as: how to use your voice and body while presenting? This was refreshing for a change.

This blogpost was supposed to be all about my adventures of exchange so far. But I would like to take this opportunity to pay attention to a recent news item as well. Since my stay here in Alta, I have realised how much I actually appreciate the critical look on tourism development and sustainability we have in the BSc Tourism. In comparison, the ‘department of Northern Studies and Tourism’ here at UiT mostly focuses on Arctic tourism. That is why, for my final oral exam of the course ‘Communication Skills’, I chose to talk about responsible tourism development and how community involvement could contribute, based on my experiences during the International Field Project.

The recent news item about a Dutch tourist in Myanmar who has been charged for putting the plug out of an amplifier during a Buddhist festival is the exact reason why I chose this specific topic for my presentation. Religious outlets belong to the culture of a country, which attracts tourists. That is why these cultural traditions should be respected, no matter what. Unfortunately, there seem to be tourists who do not. Is it because of a lack of preparation before the trip? Or do they suffer from cultural blindness preventing them to adapt to local practices? In the latter case, tourists should consider if they can travel safely and responsibly. Or if they should rather select destinations with cultural practices similar to their own. But with the lack of preparation there is one key solution: informing and educating tourists before they visit a destination. Luckily, there are several organisations in Myanmar – such as for example the Myanmar Responsible Tourism institute (MRTI) – who are currently working on projects to promote responsible tourism, which makes me very happy! And in the meantime, I will try to do the same here during my exchange courses.