Hello and greetings from Canada!

I’m happy to see you’ve clicked on this post to either find out how many meters of snow I’m currently in, how many beavers I’ve killed or how much weight I have gained so far. For now I’m afraid I have to disappoint you because the numbers for all three of these queries are rather low… in fact I’ve had more parking tickets in the course of one day.

Most of the time when BSc Tourism blogs are written from another country, they start with some fancy foreign languages serving as an indicator of how well the writer has been exposed to his or her new cultural environment (link to Saskia + Myanmar post(s)). I’m sad to say,  I won’t be able to impress you with that either. I’ll try to make this story interesting nevertheless.

As of today, 107 days ago I left the Netherlands for a new life-chapter on the other side of the pond called ‘exchange’. 112 days from now, I will be heading back ‘home’. Why I wrote home between quotation marks is because I am one weird exchange student. My parents and sister moved to Canada 1,5 years ago leaving me behind in the Netherlands (they even took the dog !!). Now, I live at my parents again, enjoy free food and accommodation, walk the dog and fight with my sister (jk lvu Marjo). Basically: I’m home now.

Now that I am halfway through the semester I think I’m safe to say that I’m having the time of my life here. I just recently broke my record of time living in another country and it tastes like more. Nature, university, family-life, people and church, I’m enjoying all of it to the maximum.

I can’t describe how grateful and privileged I am to have this opportunity and I don’t believe me ending up here is a coincidence. Let me explain: my grades have always been quite average so having to wait for the results of our exchange coordinator at the time was extra terrible. The University of Guelph was basically my only option as it is about 50km from my parents; the only other university in Canada that has a partnership with Wageningen is the University of British Columbia, about 4.288,3km from here. [Shout-out to my only other classmate in the Americas: Nellie] (Like this blog if you want her to write one too #WeWantNellieBlog).

Now the fact that I’m here shows that the result was not as bad as the process of waiting for it, but when Pieternel later on told me that at first I wasn’t selected for my first choice until Guelph released two extra spots two days before the deadline (of which I got one), I was flabbergasted. 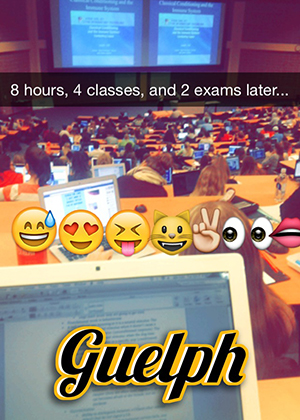 Also, I did not only get my first-choice university, by the end of August I was successfully registered for all my first-choice courses too: something that is not that obvious at all for exchange students due to prerequisites, courses that are full or courses that appear to not actually be courses after all. Finally, the cherry on the cake was when I found out that all these five courses I had chosen randomly fell into place in my schedule like a puzzle. All were going to be on Tues- and Thursdays without overlap, meaning that I only had to do the 1-hour commute twice instead of four or five times a week.

I don’t know if it does to you but to me this all sounds too good to be true. And still it’s true! I believe that it all happened through faith and grace and that it was ‘meant to be’ for me to come here.

So before finishing off this story it might be wise to elaborate a bit more on the actual school related things I do (or pretend to do) here. I’m completing a  self-constructed minor called ‘Psychology & (Social) Environmental Development’ at the University of Guelph. The courses that it includes are: ‘Intro to Psychology’, ‘Personality’, ‘Cross Cultural Psychology’, ‘Society & Environment’ and ‘Environment & Development’.

I can honestly say that these are the five best courses I could have ever chosen, there’s been moments in class or the library with me almost jumping on the tables because the stuff I was hearing or reading was so interesting (I know, don’t judge, emotional guy).

As you might have noticed none of these courses are directly related to tourism. It’s nice and refreshing to orient myself a bit outside of the ordinary but at the same time I see lots of opportunities to link and relate what I learn to a more specific field within tourism. I’m learning about perception & brains, differences between individuals as well as cultural groups, environmentalism and underdevelopment all at the same time. I must say it is quite a relief to have gained a clearer and more specific idea of what my interest are through my minor. Looks like after 10 years in school Marc’s starting to know what he really likes, who would’ve thought!

That’s about it for now; next update will be as soon as any differences occur in the amount snow, beavers killed or weight gained!

Love to all my fellow BTO’ers, Pangea family, friends, and other readers that made it all the way to the end of my story.