‘If we would all go for a couple of beers tonight and the hangover would not come in the morning, but in 5 years, and it would not be felt by you but by someone else, wouldn’t you drink more?’

This is one of the concepts Xavier Font, professor of Sustainability Marketing of the University of Surrey, used to illustrate the difficulty of persuading people to be more sustainable. One of the key messages Professor Xavier Font had, was to make people want to do something by themselves, rather than telling them to behave differently. This includes using marketing in a smart way; one that does not focus on being green or sustainable, but one that just makes it easier for the visitor in general.

An example Professor Xavier Font used was going to the beach by car in summer. It’s annoying. You have to search for a parking spot forever, the car will get HOT and after a year you still find sand in your car. The solution? Promoting to rent bikes! Cycling through the dunes, is a nice experience in general, you don’t have the sand problem or the parking spot issue. And you’re finally having that exercise. At the same time, you’re being green, but that’s not the focus of this marketing tactic.

The role of a company is to help the customer to make informed choices. In fact, 95% of the work of being sustainable should be done by the supplier, and only 5% by the customer (by putting the cup in a bin, for example). Creativity is a very helpful tool in finding solutions: ‘Remove two zeros from your budget, and you’ll suddenly be creative’.

So, what can you do to live more sustainable? You can start with reducing alcohol consumptions and minimizing (red) meat for example. How we spend our money decides how sustainable each one of us is. It is important to understand that we, as students, often think that it’s too expensive to live sustainably. But what Professor Font emphasizes, is that it is all about our choices and it is possible if we really want to. We shouldn’t keep pointing fingers at somebody else.

Summing up, the guest lecture showed us how companies are able to change consumer behavior and inspired us to think about these issues. Thank you, Xavier Font! 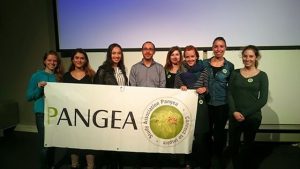 On October 20th 2016, the Education Committee of study association Pangea organised a guest lecture by Xavier Font: a Professor of Sustainability Marketing at the University of Surrey, UK. His background lies in marketing, however, he also has a degree in Tourism. The combination of these two disciplines, makes his work very valuable for our study program.