A taste of Torajan culture

“Save the animals!” A common slogan used by different animal help organizations in the western world when trying to explain the cruelties humans oppose upon animals in often less developed countries. “It’s just a part of their culture” is often the counter argument. An interesting debate when studying tourism and one that played in my head as we walked onto the Bolu market. Here, the buffaloes stood, tied to a meter of rope through their nostrils, in the burning sun and awaiting a future of having to fight another buffalo before being slaughtered. All this, in service of a (celebratory) ceremony for the burial of a human. The smaller the animal, the worse it gets, pigs being crowded into tiny dens 25 at time, lying there lifeless. But as depressing as this may sound, don’t click away just yet. This was just the start of the day and it got much more fun from there…

As we cramped into a small public transport bus (one of the better ways to ‘be like a local’ as seemingly everyone wants nowadays) we enjoyed the beautiful scenery of Indonesia before arriving in Sa’dan. Here an entire village was being built in traditional style for one of the previously mentioned ceremonies. We came to meet an old lady, said to be over a hundred years old and famous amongst locals for being the last person to be able to carry out the older traditional way of weaving. The purpose of the meeting can be found by reading our research but I can definitley tell you, she made some beautiful fabrics. 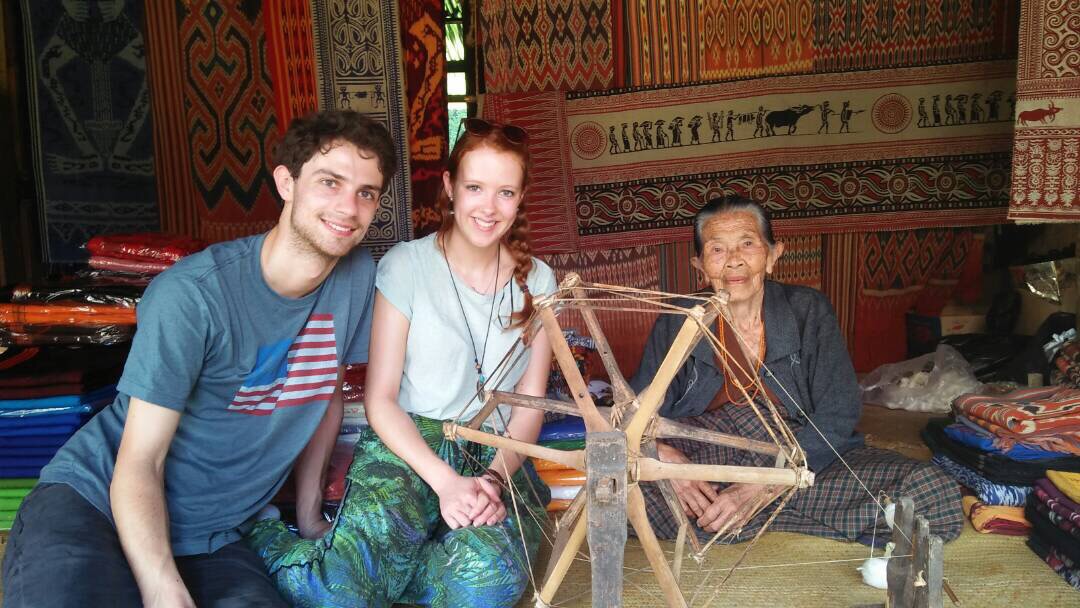 A lovely local lunch (cooked inside bamboo, above a small fire) and a small but frightening buffalo attack later, we ran into a prominent member of the local DMO (destination management organization, www.visittoraja.com). He already knew us and our research purpose, and was very kind to take us on a personal tour into the mountains with his car. The road led through jungle mountain roads (we saw a snake!!) up to several spots with beautiful panoramic views. Eventually we ended up at a mythical place with huge pillared rocks for the dead, each one requiring the sacrifice of at least 24 buffaloes. Aside from the pillars were different graves chiseled into bigger, round rocks, and baby graves cut into a tree. It was interesting to see because even though the deceased were buried in these traditional graves in the middle of the jungle, they were accompanied by a Christian cross, because the Torajan people share a mixed religion of traditional beliefs with christianity. We walked around the spirits of the dead (and a lot of darned mosquitoes!!) before receiving a ride back to the hotel at the perfect moment, as a heavy tropical rainstorm showered down upon us the moment we closed the car door.

After this amazing day of different perspectives, both on nature and culture, I have to end on a lesser note again, as the evening was filled up with transcribing interviews. A moment to reflect, and annoy yourself, with the realisation of how many words a person can say in a single second, and how long it takes to the put 30 minutes of interview onto a piece of paper. Research is so much fun!

I want to end this blog post with a shout out. A special thanks to the Bandung students who were with us the whole day. Della for getting us to Sa’dan and translating the interviews during the meetings. Pandu and Bagash for also helping in guiding us around and Richard for picking us up when the rain came in. Also Alu (if I spell it right) for the tour and Swiss Contact for the lunch and additional information!!! Without each and every one of you this day wouldn’t have been as special!!!