If you have ever been to a Dutch wedding, you know that some kissing will be involved after the I do’s. It is part of the tradition, even in church. Amongst the invitees are family and friends and maybe a few co-workers. The closest ones might make it to the afterparty where the union of the newlyweds will be celebrated with food, drinks and games. As paying for the catering can be expensive and weddings are already quite costly – think of the venue, the dress, the decorations, etc. – often not all acquaintances can be invited. This, however, did not seem to be an issue for the Torajan wedding we kind of crashed last Saturday.

First, let me explain how we heard about the wedding in the first place. When you are doing research for multiple weeks in a city, you get to know a lot of people living in that area. And so it happened that some of us were invited to a local wedding. The word spread, and soon most of us were interested in joining this event. Locals had said that it would be possible for us to join as well, so last Saturday at 10am we were, as much dressed for the occasion as possible, sitting in the church for the first part of the wedding. The service itself was actually similar to one of a Dutch wedding. There was only one striking difference. The “you may now kiss the bride” part. There was no kissing! The ceremony ended with the exchange of the rings.

After the bride, groom and wedding guests drove away to the village where the ceremony would take place, we were a bit unsure whether it would not be a private event and if we could even find our way to the wedding location. However, we then got offered a private car and two of the wedding guests drove us to the location of the ceremony, which was a nice turn of events.

The festivity took place in a village close to Rantepao, called Talunglipu. When we stepped out of the car, we were looking at an enormous field with Tongkonan on both sides. There was a red carpet, live music, a stage and many, many people sitting under the Tongkonan. At the entrance, we were given a beautiful hand fan and people guided us to front row seats. The entire spectacle felt like a Roman play with its bread and circuses. Though the bread was now ice cream and the games were the traditional dances and songs being performed. 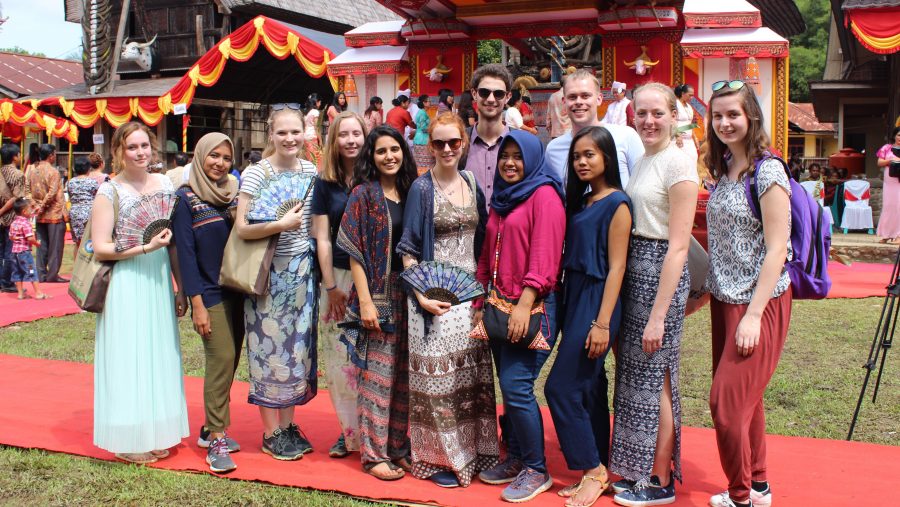 Suddenly there was some English talking saying that the tourists were encouraged to stay and eat with the family. That was the sign for the locals to run to the food. Literally. I have never seen so many people grabbing food that quickly. It looked like they hadn’t eaten for days. We were a bit more reserved. Could we really eat from the food? Shouldn’t we congratulate the couple first? But no, that was not an option. Multiple people told us that we really should get lunch. And who are we to say no to that?

The wedding was thus really different from the ones we are used to in the Netherlands. Everybody is welcome here! Even people like us, who do not even know the bride and groom. It seemed even important for them that we had a nice time. Again, it was a warm welcome in Sulawesi.