The ‘echte meisjes in de jungle’ have finally spread their wings and left Tuktuk for the next adventure. Unfortunately, this didn’t go off without a hitch. The start of the journey went smooth as always, though one of us had to run away in the middle of a consultancy, leaving our supervisor perplexed. Just on time, we stepped on the ferry and followed our way to Parapat. Having easily survived this first part of the journey, it’s time to let the adventure begin. And we promise you, this is what you would call an adventure.

In the harbour, a quite intrusive man almost dragged us to his van, saying he would bring us to Siborongborong for IDR 400.000. Being poor students, we kindly rejected his offer. Little did we know we had better accepted his offer… For the small amount of IDR 20.000, we and our backpacks were thrown in a becak and followed our way to the “bus station”. If this station even exists, is something we are still asking ourselves.

When the becak stopped somewhere on the side of the road, we had to squeeze ourselves into a van which only provided 3 spots and barely any room for luggage. The driver however did not see this as a problem. Even though we don’t speak the Batak language, we definitely understood that they were saying it would all fit. But it did not. This resulted in one of us sitting with one butt check on the seat and multiple backpacks on her lap. Though the back pain was immense and the concept of comfort was forgotten, we were still laughing.

We noticed that the driver had already stopped three times to check his tire, though he decided it was all fine and just continued. We, however, were suspicious…

BAM! KLOETS! HUTS! Our suspicion was justified. The ditch was coming closer and closer. PANIC!…. “AAHH!” And then all of a sudden, the van stopped… SILENCE. 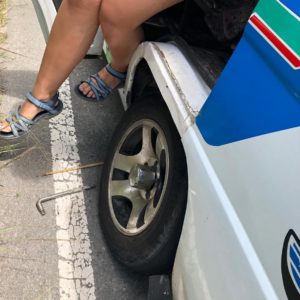 We noticed the entire car was hanging to the left, and looking out of the window, we were close to the waterside. A blowout tire was the cause of our drama. The driver said we had to wait in the car while he would fix the tire. Maybe this is Indonesian logic, but fixing a flat tire with 14 people in the car, doesn’t seem logical to us.

After a little while, he realised this and we could finally get out of the perfectly comfortable positions we were in. We were left with two choices now: 1) waiting for someone to bring a new tire, or 2) hitchhike and get in a car with a total stranger. We chose the 2nd option.

There he was, our saviour. He was not able to speak a single word of English, but fortunately he was able to drive a car and bring us to our destination; Piltik Homestay – “A difficult road leads you to a beautiful place.”

All’s well that ends well… We are still alive and laughing. “Mum, we love you!”

(Disclaimer: Although this story is based on true events, it should be taken with a pinch of salt and a good sense of humour. We are all ok!)