Christmas in the hometown of Santa

My name is Kaylee and I chose to go for my minor to the winter paradise called Rovaniemi. 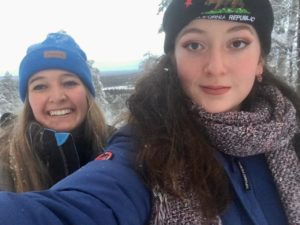 This is Santa’s hometown and an area filled with beautiful nature. If you are lucky you can see reindeer walking outside and squirrels are here in overflow. In autumn the trees show a magnificent scheme of colours and in winter they are covered with snow. There is also no shortcoming of lakes that even freeze in the winter. Skiing, ice skating, snowshoeing, and much more other winter activities are possible during the wintertime. I went snowshoeing a few weeks ago, which brought me high in the mountain with trees that looked like melting ice cream with the background of a beautiful sunrise. The northern lights can be seen the best in September and October; I have seen them many times. They look absolutely beautiful and can even be seen from the balcony of my dormitory. However, they will only show for a couple of minutes and can then already have disappeared. Another very cool aspect of studying here are the ice hockey games, which are held in Rovaniemi. These cost only six euros for students and are spectacular to watch.

Now it is Christmas period, which means that there are many lighted up Christmas trees scattered over Rovaniemi. Snow is everywhere, and it can be quite cold (-16). Christmas lights are hanging across the centre and an ice rink is also located here. There even are hills made especially for sleighing in the centre. A little nativity scene, which is partly made from ice sculptures, can also be viewed here. There is also a little cozy Christmas market, located in the centre and another one in the Arctic centre, where people sell their unique handicrafts. In Santa village there is a special Christmas opening, which I have joined. The elves perform some classic Christmas hits in this show and Santa accompanies them in the end to kick of Christmas season. This is one of the few places where you can even work as an elf yourself, which would look very good on your resume of course. You can go and meet Santa to see if you have been naughty or nice and visit his reindeers. There is also a husky farm located here, where you can meet and pet the huskies that pull the sled. You can have a drink at the ice bar after.

Now, I will share some information about the University of Lapland and my time there. I followed the subjects of Arctic studies. This entails:

And then lastly, a free choice subject. The last subject that I chose, additional to these, was Chinese Culture and History. I loved all the subjects that I had chosen, and they were all very informative. The teachers that give these subjects of Arctic studies are from the Arctic centre, which is a science centre about the Arctic. Therefore, these are all researchers of the Arctic area. This results in them having a lot of knowledge about the topic as they were often involved closely while doing their research. It was nice to study about the topic of the area that I was actually in. I could see for myself what I had learned in class earlier, which makes the information you get much more real. The classes were also quite small on average, which in my opinion is a positive aspect, as you are much more involved. The subjects were completed with an exam, essay and/or a presentation. This depends on each teacher, on what he or she decides to do. In my opinion the subjects are not too difficult to pass. You will definitely have enough free time to do fun stuff in between, like exploring nature.

There is also enough other fun stuff to do for the students as the exchange students often organize parties in the basement of one of the dormitory buildings. There are several buildings for exchange students located close to the university. I would definitely pick one of these, as in wintertime it can become a struggle to get to university otherwise. The centre of Rovaniemi is quite close to the dormitory and the university, it is about 15 minutes with the bicycle. There is one great student bar located in the centre or Rovaniemi called Kansan Pubi, which has by far the cheapest beer. Furthermore, there is one very popular nightclub called Halfmoon. This was not my favorite however, as the Finnish nightclub differs quite a lot with its taste in music compared to the clubs I am used to in the Netherlands. The most fun for me, were the parties organised in the basement area by the exchange students themselves. It is great fun as you start to know most of the exchange students and become sort of a unity. Overall, I had a great time on my exchange in Rovaniemi and I will definitely miss this winter wonderland (except for the expensive prices).

Thank you all for reading our Minor Mondays! As the minor period of the academic year 2019-20 is coming to an end, this will be our last posts for now.