My student life as a fake Norwegian

This is a greeting I hear pretty much every day, because every Norwegian thinks I am one of their kind. Even when they hear my name, because apparently being the most common name in the Netherlands wasn’t enough. Sanne is also a super popular name in Scandinavia. Today I got Swedish which is also a common mistake. Let’s be honest though, I kind of love tricking others into thinking I am Norwegian by using my super basic Norsk language skills. As a Dutch person it’s really easy to blend in with the Norwegians, just be blond and kind of tall and of course you have to be semi-awkward during the day and super social during the night. This is a major trend in Norway. If you want to get to know Norwegians, you have to talk to them while they’re holding a beer. Otherwise it’s pretty tricky to get into the inner circle of Norwegian students here.

View of the NMBU campus

My roommates in my flat are a perfect example of this since one I only get to know when she goes out, and the other we call ghost Norwegian since we never see him. But of course, not everybody in Norway is like this. People are super friendly, talk perfectly English and are always willing to help a confused international. Most of the internationals live in Pentagon where I am typing this story from right now. Pentagon is the most iconic place on the campus in Ås. All the pre-parties and after-parties happen here, also known as vorspiel and nachspiel. But it’s also a place where you just jump from balcony to balcony and you almost always know at least one person who lives in the apartment. In my apartment I am lucky enough that I also have two great roommates which are Lorenzo (Italian) and Marleen (Dutch). Marleen pretty much got me up-to-date on everything I need to know about Wageningen and Lorenzo is simply my daily entertainment. Since I’ve never seen anyone who’s so chaotic. For the Dutchies here it’s not just Marleen and me, but also some other 20 Dutch people. All from Wageningen University of course, except for one girl from Nijmegen. So, I don’t have to miss the Dutch language here.

Furthermore, student life is very different here than in Breda. Since I live in Ås, which is a small village with 3 supermarkets of which only a small part of one is open on Sundays. However, students make up most of the population here just like in Wageningen. You could kind of say that it’s the Wageningen of Norway. NMBU, my university, is also a life science university. Sometimes when reading about coastal ecosystems I even wonder what I am doing here with a Tourism major. But it’s pretty doable if you do all the readings which is a lot. Way more than during my bachelor, but it’s also something I otherwise never would be able to study. I even already found some really interesting topics I would like to further explore in either my thesis or master. But getting back to student life besides studying and reading, it’s pretty great. Every week there are always events happening at campus or somewhere else in Ås. Mostly organized by students, the student entertainment centre (Samfunnet) or student associations. 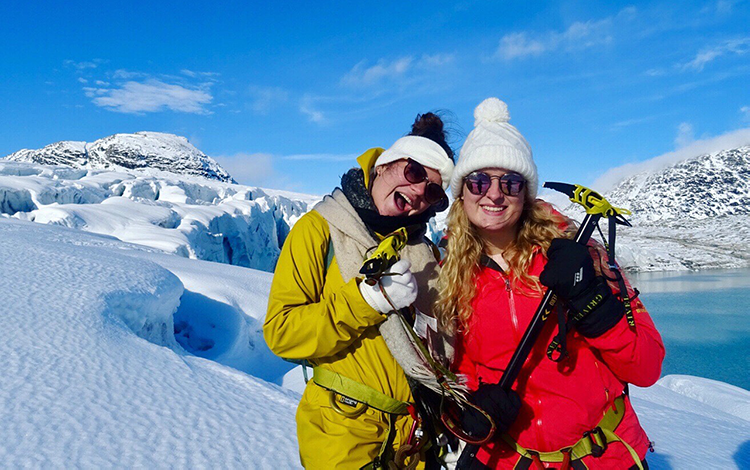 ESN trip to Jostedalsbreen (with a really cool ice-axe)

One of the student associations I most like is ESN Ås, since I am one of their new board members. I worked a lot with ESN in my last year in Breda and I got elected here as the new event manager. A few moments ago I was actually still at an international potluck of ESN where I made kapsalon. A classic Dutch dish to eat after going out that everyone should have tried at least once in their life. ESN Norway also organizes trips here in Norway, but also to Lapland and Russia. I was lucky enough to go on the Fjord Adventure trip. Here I experienced probably the most Norwegian experience, but also the most amazing experience of my life. This was kayaking to and walking on a glacier. The glacier we went to is called Jostedalsbreen and it’s the biggest glacier on the mainland on Europe. It was really weird to be surrounded by snow and ice during the middle of September while my friends in the Netherlands were still sitting on terraces. This made it even more unreal. Our guide even brought hot chocolate to drink on top of the glacier and we also had ice-axes which were there because they were really cool. I mean sure practical, but they look so bad-ass.

Moreover, I also have a lot of people that want to visit since it’s only 50 minutes away by plane. And not enough weekends off unfortunately to have them all come over. But the ones who do visit give me the opportunity to go explore other places in Norway. When you just stay in Ås for a while you sometimes forget how diverse the landscape in Norway can be. Where I live it’s mostly hills and a lot of trees, but where I went with my brother Thijs there was almost no vegetation. Just rocks that you could jump from and to leading to the sea. This place was called Verdens Ende which means World’s End. When I first heard that name, I thought it was just to attract tourists. But it actually feels like there’s nothing beyond that point. Obviously the Vikings here knew better.

Other cities that I’ve seen are Trondheim, Bergen and Oslo and soon I can add Tromsø to this list. I hope that we’ll be lucky enough to see the Northern lights there and of course to go husky sledding. Because who doesn’t love huskies? I also still need to find our campus moose before I leave, the one campus animal I have found is Pusenbrede. This is our campus cat who is kind of royalty around here, but having met him a couple times I can say that he has a huge attitude. But yeah, that’s cats being cats.

Only two more months to go here and time is moving fast, even though it feels like I’ve just begun exploring Norway and Norwegian culture. So, I really have to start those duolingo courses to convince others that I am Norwegian and of course the most important thing of all: I have to find that campus moose.