Hi! My name is Nynke Susijn, and I am currently a 3rd year BTO student. I’m following my self-composed minor at Utrecht University (UU), not as exotic as I was hoping when I started with BTO but still a very fun place to study! I am currently enrolled in the courses “Globalisation” and “Political Geography” at the Faculty of Geosciences and next period I will also be following the course “Development Geography: Theory and Practice” and a course at the Faculty of Law, Economics and Governance which is called “European Governance”.  All lectures are on campus, so I don’t really experience any hinders from COVID here, thank god. 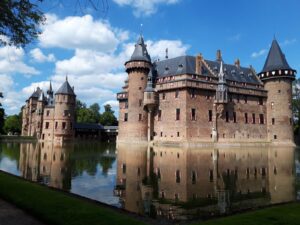 I chose these courses because I wanted to make sure I’d be admissible for the MSc I was into: “International Development Studies” at UU. However, during the past few weeks, I realized that another MSc fits me better: “Human Geography”. So right now, I’m just hoping that I will still be admissible for this master’s degree. I applied a week ago and will receive a reaction within this month, soo fingers crossed 🙂

During the first and second years of BTO, I really wanted to study abroad during the free-choice period, but then COVID happened. I was rather pessimistic because I didn’t want to get my hopes up and then eventually cancel the whole trip so, therefore, I decided to stay within Europe. I looked at every possible university in Europe and none had courses that would make me admissible for this MSc I mentioned before. So that’s why I decided to not leave The Netherlands at all. As well as the fact that I would hate studying online while sitting in a room abroad in solitude. I’m not good at being alone haha.

When I decided on the MSc, I started mailing with a bunch of people at UU, and it took me months to receive advice on which minor to choose. A couple of months later the pre-composed minor was not available at UU anymore, so I had to go through the whole process of emailing back and forth again to receive recommendations on courses. When the registration period finally opened, I was declined for one of the courses, which made me furious after such a long time of communicating with teachers and other staff members. I went to the complaints coordinator, who eventually got me in. So, my advice to you: start getting in touch with the university if you want courses that match a master’s degree as early as possible. I started in September, and I didn’t have a solid plan till May… 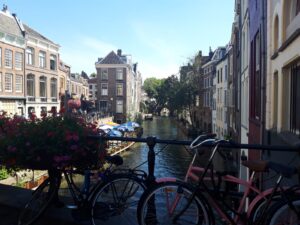 Utrecht is an amazing city and I love living and studying here. I was a bit scared in the beginning about the fact that I didn’t know anybody in the courses, but that appeared to not be necessary as almost nobody knows each other, apparently. At BTO we are used to knowing everybody, this is very rare for a university. I am following courses now with between 100 and 140 students, so it’s impossible to know everyone. Just ask if you can sit next to someone who seems nice, and they surely won’t mind because they don’t know anybody either! I even received a message from someone who’s in one of my tutorial classes asking me where we had class because she had trouble with her schedule. From that day forward, we always met in front of the building so we could figure out the way together. Sometimes rooms are very difficult to find and the Uithof (campus) is sooooo large haha.

Anyway, my whole application period was a huge mess and incredibly stressful. So please, start early! Teachers and universities take a lot of time to respond, and sometimes they don’t respond at all. This is especially an issue if you want to follow courses that match a MSc, just like me. Investigate with which BSc from the same university people are admissible for that MSc and then look at which courses they get. If you choose courses from this BSc, this will give you a higher chance to be admitted into the MSc. And even if you eventually wind up wanting something else, then that’s no issue either. You can sometimes follow a premaster for a year between both study programs, in order for you to be admissible. But if you want more certainty, just like me, then carefully choose your courses.