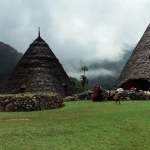 Since the exclamation as one of the Seven World Wonders of Nature, the Komodo National Park is a booming tourism destination. On Komodo, Rinca and Padar, tourist accommodation rarely exists. Consequently Labuan Bajo, Flores, Indonesia has become the tourist gateway to the Komodo National Park. Only few tourists explore the many sights and attractions the Western part of Flores – Western Manggarai – has to offer. As a consequence Island- based wildlife-, adventure-, and nature tours (IWANTs) located on the Western part of Flores do not benefit from the growing tourist arrivals in Labuan Bajo.

This study analyzes the performance of the island-based wildlife-, adventure-, and nature tours value chains in the destination Flores with a focus on Labuan Bajo and the Western Manggarai district. Using participant observation, focus groups and semi-structured interviews with tourists, tour operators and support organization, opportunities for stronger community involvement as well as improved solid waste management are identified.